The Minnesota State Fair VS The LA County Fair

Since the beginning of August I’ve been talking about my love of the Minnesota State Fair, and how I miss it since moving out to LA.  And how this summer I was on the look out for my very own replacement right in LA, if that was even possible.

Well, I have to admit I have found it in The LA County Fair.

But, I do want to put the two side by side for comparison sake: 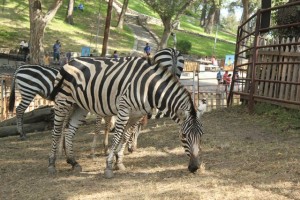 And you walk further into the livestock barns and you run across horses, rodeo shows, sheep, and more.  There’s plenty of animals to look at.  The livestock was far bigger compared to the LA County Fair. 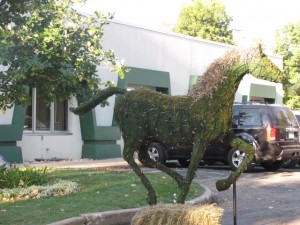 The winner: Because I wasn’t prepared for the exotic animals nor was I anticipating it, it was a very pleasant surprise, and because of it, the LA County Fair won me over with their selection of animals.

The LA County Fair had me out for an evening of food, and I got to try a ton of amazing food, and it made me see a huge selection from what they had, and I loved every minute of it.  I found some favorites that evening too with Flavors of France, Sweet Potato Marshmellow Yammies, and The Naked Pineapple. 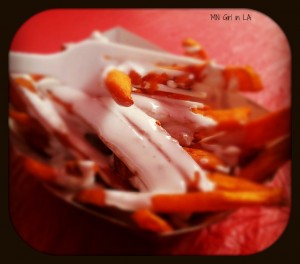 You can read the full review here.

Has everything on a STICK.  Although the LA County Fair had their corn dogs, cheese on a stick and lobster on a stick, there was a lot missing for me.  In Minnesota I could get alligator on the stick, jerky on a stick, pickles on a stick, fried fruit on a stick, cheesecake on a stick, and the list goes on and on.  Every year they come out with something new and different.

I’m not saying the food selection at the LA County Fair is terrible.  Trust me, I fell in love with my Deep Fried Peanut Butter and Jelly sandwich from Chicken Charlies, I’m just saying I miss the creativeness of “Food on a Stick.”

When you go to the Minnesota State Fair your shopping is usually in one place: The Grandstand.  This huge, two level building has a ton.  It gets hot fast, but it’s fun to browse through.  There’s also the Home Improvements building.

I honestly don’t know how many shopping buildings there are.  Alls I remember is walking into one building, coming out in one part, and running across 3 or 4 more buildings after that.  And when I thought it was done, I ran across one more building.  It was endless.  I needed a day just to hit up all the shopping spots of the LA County Fair.

One thing the Minnesota State Fair had a ton of were newscasts.  The local news station had their booths at the fair, and they’d do live shows straight from the fair.  It was a great way for the community to show support and be apart of the news, and it was a huge favorite.

And then there were big concerts at The Grandstand every evening.  This past year an evening out with Rascal Flatts, etc.  It seems as if the shows continue to get bigger and bigger every year.

I feel the Entertainment is smaller scale, but the shows are more personable.  They have a bear station where they do a live event with the bears.  They have a pirate with his parrots in which there’s an entire show learning about the birds.  There’s a live circus at the fair where you can watch trapeze and other events take place. 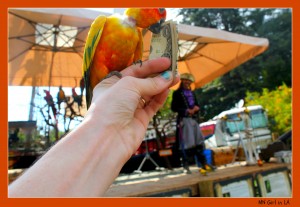 The shows are fun to watch, they’re educational, and they bring a variety.  I spent a lot of my time at the fair enjoying these very personable shows.

There was also live horseracing taking place right at the fair.  Yes, the LA County even had concerts throughout the fair, but on a much smaller scale basis.

Winner: They’re both winners in my eyes.  I appreciated the variety at the LA County Fair and how personal and fun their shows were, but there was also something very special about sitting in on your local news stations telecast.

In the land of Minnesota, it is BEER haven.  They have the beer gardens.  In the International Village you can even purchase your beer on a stick which is a paddle of 4 different tastings of beer from Summit! 😉 Beer is everywhere, and for those that love it, it’s a good thing, but for those of us who don’t, the selection is lacking.

The Wine Marketplace is my haven.  Over 100 different bottle of wines that have won out in the International Wine Competition, but the part I loved the most were their wine education classes.  You mean, I can go to the fair, and even learn about what I love while I’m there?  Heck yes! 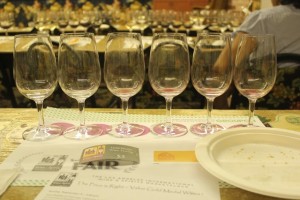 Winner: I think they’re both winners.  On a personal level it’s the LA County Fair because if you have wine you’re always a winner in my eyes, but the midwest is ingrained in beer, and there’s a huge market there.

30 Days of Fun!  You honestly can’t beat that.  I was always curious to know why September though? =)

In the end both fairs are a ton of fun, and they’re unique to their demographics.  At the LA County Fair there are a bunch of personal touches that I really loved, and catered to me and what I like.

The Minnesota State Fair will always have my heart, but what I miss most, is the food on the stick.

I hope you enjoyed my comparison.  Please comment and tell me what your favorite things to do at the LA County Fair or the Minnesota State Fair =)

You still have until Sunday, September 30th to attend the LA County Fair.  Get out there this weekend, and avoid CARMEGEDDON 😉