Disclosure: I was invited out to Dave and Buster’s to try out their new summer drinks and menu items.

I’ve always heard of Dave & Busters.  I knew they were a fun place that catered to adults that had a fun game like atmosphere inside it.

However, for whatever reason, I never made it out that way.  So when I was invited it was my chance to see the story behind Dave and Buster’s, learn how it all works, and experience it first hand, and then decide if I’d be heading back. 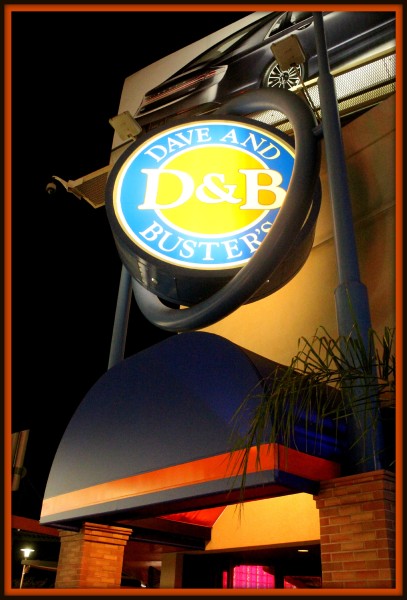 The story of how Dave and Buster’s came to be.  This story was told to me by awesome general manager “Ralph Norwood” at the Orange, CA location.

First, there was Dave.  He wanted to open a restaurant, in which he did.  Soon, Dave met Buster, and Buster, being a big foodie, also wanted to open up a restaurant.  With the help from Dave, Buster made it happen and named it “Buster’s Restaurant.”

This summer Dave and Buster’s have introduced some new fun drinks: 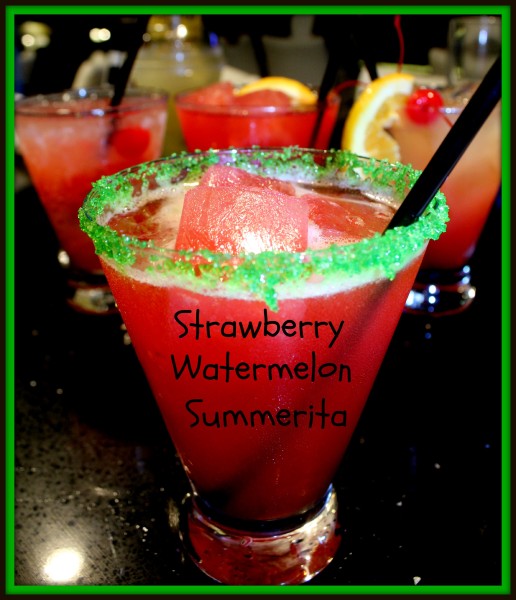 One thing I love about this drink is how the rim is coated in green sugar to give it that watermelon feel.  The ice cubes are also shaped like watermelon, but are indeed, ice cubes. 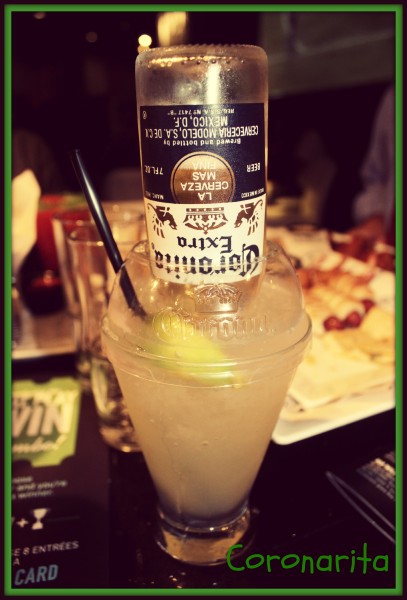 Yes.  The drink comes out with the bottle in it like that.  Don’t take the bottle out otherwise you will definitely be overflowing!  The Coronarita is just what it sounds like.  A 7 oz bottle of Corona mixed with a margarita.  And it’s quite TASTY.  (A favorite for my SO): 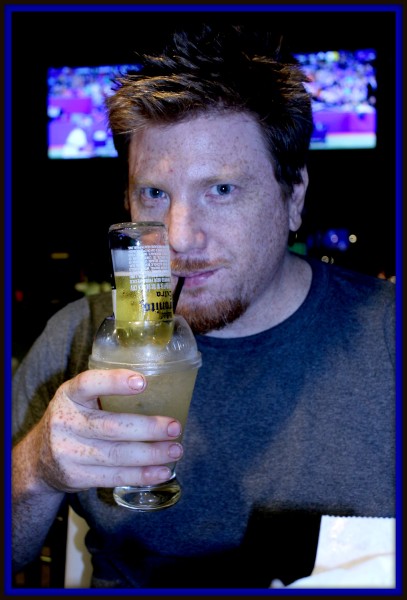 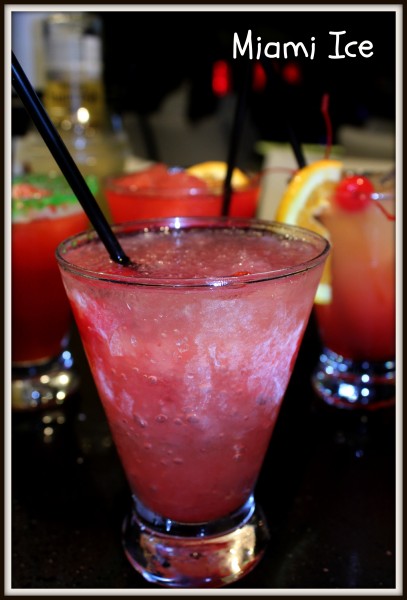 When this drink first came out the first thing I really noticed were all the little bits of ice that were a part of this drink and why it’s coined “Miami Ice.”  Not being a big “ice” fan I wasn’t sure if I’d like it, but this ended up being the first drink I completely finished.  Exactly like a sno-cone! What’s not to love?

Made of: Skyy Infusions Coconut Vodka and Malibu Coconut Rum mixed with Minute Maid Lemonade and Bacardi Strawberry Premium Mixer.  It made for a tasty drink. 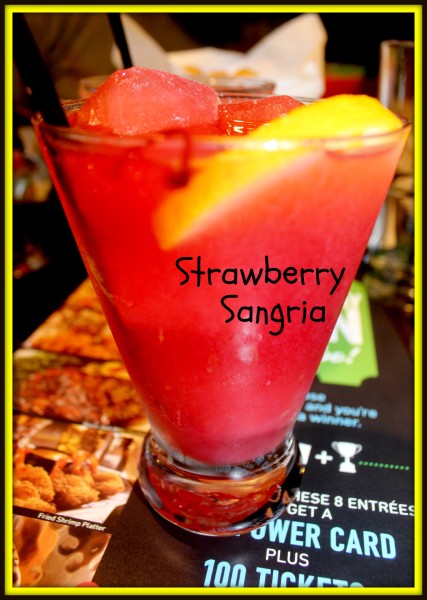 And nothing says summer like Sangria’s.  This Strawberry Sangria is no exception.  A combination of Cruzan Strawberry Rum, Canyon Road White Zinfandel, and Bacardi Strawberry Premium Mixer poured over Strawberry flavored ice cubes and topped with a splash of club soda.

That evening they also brought a Red Sangria to fit the Summer Theme.  They also have a White Peach Sangria on the menu. 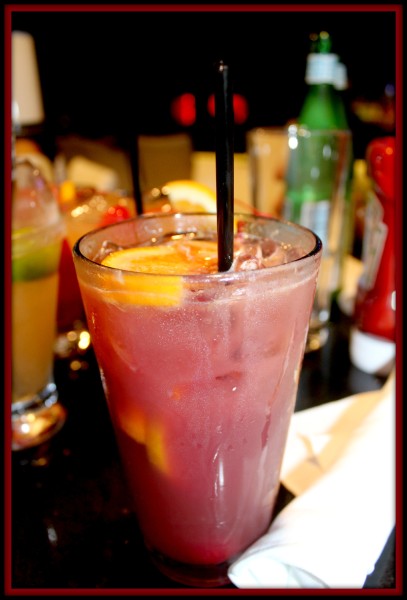 Another fun drink that’s on their menu and fit into the summer themed, is their “Walk the Plank” 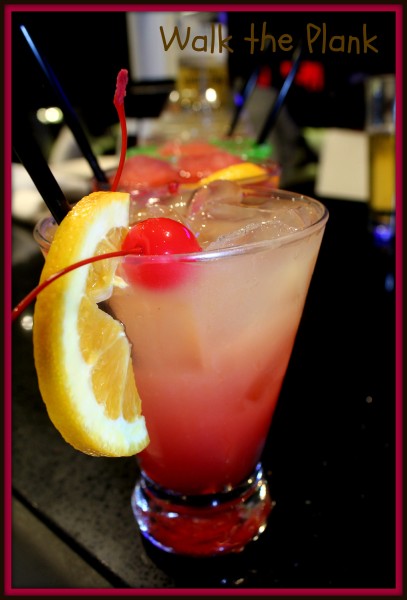 These drinks are very fun, and very fruity.  For those that may not necessarily like these kind of drinks, have no fear, Dave and Buster’s has you covered.

For a night of fun out with your friends you may just want to go ahead and order the “Beer Tube.” 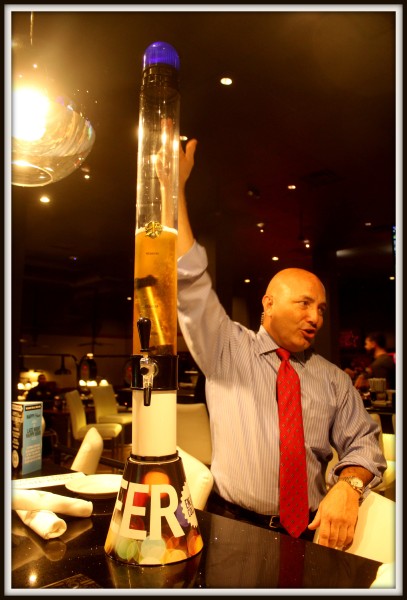 How awesome is that, right?  From 20 ounces to 50 ounces, all the beer you want, served to you in a tube.  And it’s very easy to pour out too: 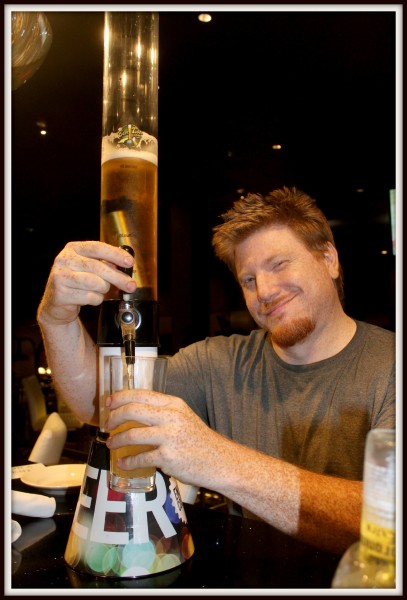 Just some of the new drinks being showcased at Dave and Buster’s this summer.  Anyone up for a night out in the next few weeks?

Next week we will be exploring some of the food options available at Dave and Busters.  And the following week, some of the games.

Disclosure: I was invited out for a night at Dave and Busters to try out their new summer drinks, menu items, and games.