Disclosure: I will be attending this year’s tree lighting at Ghirardelli Square. Post may include affiliate links that help keep the site running. 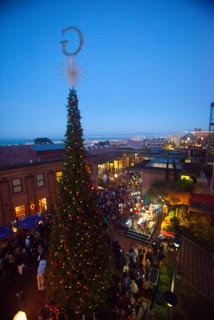 Ghirardelli Square has held a special place in San Francisco for well over 50 years.  Next Friday, November 28th from 5 to 8pm, the Square will be transformed into a winter wonderland during their official tree lighting.

A little history about the historic square: Domingo Ghirardelli purchased the entire city block in 1893 to headquarter the Ghirardelli Chocolate Company. The 15-foot-high illuminated Ghirardelli mega-sign was added in 1923. In the early 60s the company was bought by the Golden Macaroni Company which moved the headquarters to San Leandro and put the Square up for sale. In order to prevent the land from becoming apartments, the Roth family bought the Square and converted the historic brick spaces to an integrated retail and restaurant complex in what would be the first successful, major adaptive re-use project in the U.S. It opened in 1964. In 1982, the Square was added to the National Historic Register. 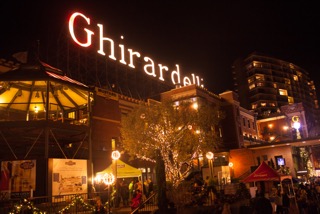 I know I will be attending and enjoying this festive time of the year in the week’s ahead.  Ghirardelli Square, being one of my favorite places to visit in San Francisco.