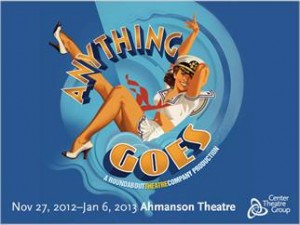 “Anything Goes” is now playing at the Ahmanson Theatre through January 6th, 2013.

This play, written in 1934, is about the lovers, liar, and clowns aboard a transatlantic cruise ship known as the S.S American.  As it sails off to sea, two unlikely mates come together on a course of true love.  With a little help from singing sailors, an exotic disguise, and some good old fashioned blackmail. 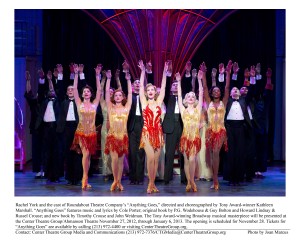 The Ahmanson has special discounted tickets available through December 21st:

Special Extended Ticket Offer Now Available!
Save on select performances of Anything Goes through December 21!

Disclosure: I will be seeing the performance of “Anything Goes” on Wednesday, December 19th