War Horse at Segerstrom Center for the Arts #warhorseoc

For the past year I have gone to a variety of theater performances throughout LA.  Each one bringing something new and magical to the stage, however War Horse has topped all others.

War Horse is the powerful story of young Albert’s beloved horse, Joey, who has been enlisted to fight for the English in World War I. Joey is caught in enemy crossfire and ends up serving both sides of the war before landing in no man’s land.  Albert, not old enough to enlist, embarks on a treacherous mission to find his horse and bring him home. 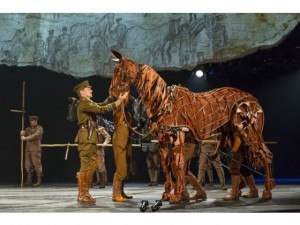 Prior to the show at Segerstrom Center for the Arts, there is an interactive exhibit that showcases a video showing the history of the show “War Horse.”  They also have demonstrations on the puppetry with a chance to try it out yourself.  World War I memorabilia and uniforms are also shown throughout the display. 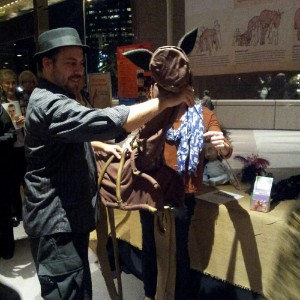 Demonstration of how the War Horse Works

But the true magic of “War Horse” is watching how Joey comes to life onstage, along with TopThorn.  The horses being complete puppets.  Here are some fun facts about Joey:

*The puppet (Joey), which weighs 120lbs, is handmade by 14 people.  Its frame is mostly cane, soaked, bend and stained.

*An Aluminum frame along the spine, lined partly with leather for comfort, allows the horse to be ridden.

*Stretched, hosiery-like Georgette fabric makes up the “skin” beneath the frame.

*A puppeteer at the head controls the ears and head; one in the heart controls breathing and front legs; a third in the hind controls the tail and back legs.

*A harness connects the puppet’s and puppeteer’s spines so his or her movements become the breathing of the horse.

*The tail and ears are moveable instead of the lips or eyelids, because that’s how horses usually express themselves.

*The puppet, just under 10ft long and about 8ft tall, has about 20 major joints.  Vertical levers curl the knees and lift the hooves.

*The neck is made of carbon fiber glass for flexibility.

*The eyes are black color behind clear resin so light refracts through them.

*The right hind lever moves the tail up and down; the left hind lever, left to right; moved together, it spirals.

*The hair in the mane and tail is made of Tyvek, a plastic like paper.

But, watching War Horse on Stage is a theater experience unlike any other, and complete magic unfolds before you on stage.  With such a moving tale of war, life, death, and love between a human and his horse, it is a story that will move you like no other.

The 2pm performance on Saturday, February 2nd will include audio description, open captioning and sign-language interpretation.

Opening night took place on Tuesday, January 22nd, and live tweeting occurred during the performance.  Follow along with #warhorseoc

Disclosure: I was provided media passes to see the opening night of War Horse at Segerstrom Center for the Arts.