Disclosure: I am not a beverage guru.  These were my personal favorite picks from the show. 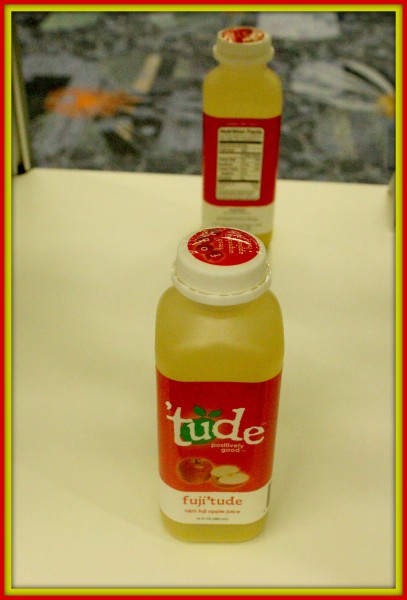 I have always been a fan of apple juice especially when it’s fresh.  ‘Tude Juice is awesome because they use the HPP process for their juices.  Juice varieties come in: Granny Smith, Fuji, Gala, and Honey.

I have to admit when I first saw the booth and all the talk of “oatmeal” I was hesitant to try it, but finally on Sunday, I got my nerve back.  I was expecting a thick oat beverage, but instead it was like water.  I was pleasantly surprised by how easy it went down, and how REFRESHINGLY good it tasted.

I will be the first to admit that I have a hard time with green smoothies.  However, what I realized is I just wasn’t making them right.  Sambazon has come out with some great already made green smoothies for us, and they’re perfect for busy people like myself to grab and go in the morning on your way to work.

I am not much of a Kombucha fan, however, Clearly Kombucha really had my attention at the show.  Talking to this family owned business based out of Fairfield, CA had me keep an open mind.

But when I tried it out I was pleasantly surprised.  The taste was very subtle, and not as vibrant as other Kombucha’s I’ve tried in the past.  I really enjoyed their Asian Pear and Black Currant varieties.

I first discovered Wild Poppy Juice when I followed a bit of the Fancy Food show.  Since I’d been wanting to try it out, and that day finally came at ExpoWest.  And it made for a very happy me!

With such flavors as: Blood Orange Chili, Grapefruit Ginger, Peppermint Lemonade, Peach Vanilla, and Plum Licorice what’s not to love?

This is an energy drink.  I usually avoid all types of energy drinks because of the caffeine, and many stories about how they’re not that great for you.  But, for some reason, I was getting really low, and someone recommended them to me so I gave them a try.

I was pleasantly surprised to find they have 50% less sodium than the leading sports drinks and it was made with coconut water.  Also had 46% less calories than the 3 leading energy drinks.  This one has me changing my views on energy drinks.

But the best part of all?  They actually TASTE good.

I first saw this cola in the press room and because of it’s glass bottle I was instantly intrigued.  Even more intrigued to find it to be an organic cola so when I ran across the booth I instantly had to try it.  And I was very very happy with how it tasted.

Fun flavors such as cola, cherry jubilee and french vanilla.  Vanilla  Float anyone?

While I was outside the Anaheim Convention Center a group of people were handing out samples of “Tea of a Kind” beverages.  These bottles were available in three flavors: Citrus Mint Green Tea, Pomegranate Acai White Tea, and Peach Ginger Black Tea.

The brewly tea, upon opening, the bottle cap will release antioxidants.  I was pleasantly surprised by how great the tea tasted.

This is my favorite Orange Juice company and every year I just have to walk by to see what new flavors they’re coming out with.  Keep an eye out for “Simply Lemonade with Blueberry.”  “Simply Orange with Bananas”  and “Simply Orange with Tangerine” coming to shelves soon.