Tips when capturing “The Sunset.”

Want in on a secret?  I’ve kind of become a “sunset snob.”  Meaning that I’ve gotten picky with the kind of sunsets I actually enjoy capturing.  Everyone is different and unique, but then there are the one’s that really blow you away.

I thought I’d leave you with some tips for capturing the sunset.  Because I’m now on the west coast and have a keen eye for “really good sunsets” now that I’ve been acclimated a bit:

1) Make the Most of Foreground

Sometimes just adding something in front of the sunset can make all the difference in the world.  If you took the fence out of this picture it would just be water and the sky.  It’d still be a pretty sunset, but to me, it would be ordinary.  Adding the fence in front of it added an entirely new dimension to this shot.

In the West Coast, it rarely rains, especially in SoCal, so a good inclination for a good sunset is after a good rainstorm.  Especially if the rain has been coming down for a few days, that day it stops usually marks for a pretty amazing sunset.  Not always, but often times colors of the pink appear.

As of late, I rarely try to capture a sunset without some sort of clouds in the sky.  Having those clouds around help mark up the sky.  A lot of clouds will illuminate a brighter orange or a bright red with the sunset, and those can make for some pretty spectacular sunsets. 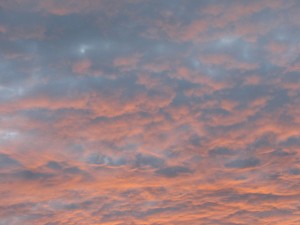 An example of how the clouds can illuminate the color of the sunset which makes for some pretty spectacular sunsets.

For those on the West Coast, pay attention to what that Ocean Fog will do.  Is it coming in?  Will it affect your sunset, or block it out entirely?  I’ve missed some pretty nice sunsets because of the ocean fog coming in so fast.

5) Keep an Eye out for Opportunities

Just look around you, there could be a moment happening around you that is just too good to pass up, and you just have to capture it.  Some of my favorite moments have included a sailboat passing by, a biker rider zooming through, or a fisherman trying to catch some fish. 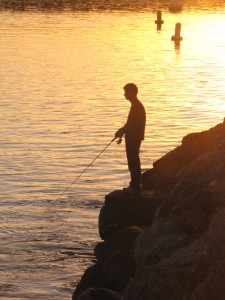 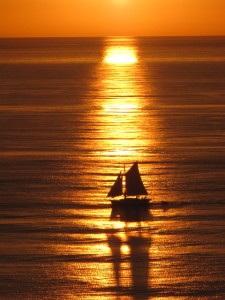 6) Making the use of Silhoettes

I love golden hour because the light is so beautiful around that time of day, but also because I love working with silhoettes and what I can come up with.  The two pictures above were opportunities that presented themselves, but the options also worked out as nice silhoettes.  Trees and fences, and other foreground options can make for some pretty great silhoettes.  Go out and play with them to see what you can come up with. 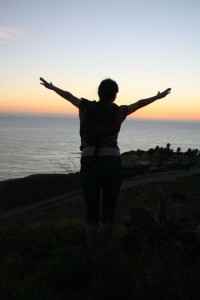 So, go out, have fun, and share what you captured!

Posted under Photography,Travel and tagged with California, Capturing a Sunset, photography tips, Sunsets, West Coast, What to watch for in a sunset
Comments (7)

7 Responses to Tips when capturing “The Sunset.”