Movies for the Wine Obsessed

It was only a matter of time before my obsession with wine would eventually collide with my desire to see wine based movies.

The past two weeks I have invested time into watching these kind of movies and my suggestions are what follow:
1) Sideways (Widescreen Edition)

This movie, which came out in 2004, is what truly brought the Santa Ynez Valley to fame as you watch two men in their forties take a week long trip to Santa Barbara County.

Definitely showcasing famed wineries such as Sanford, Frass Winery and many others while showcasing famous spots around Santa Barbara County such as The Hitching Post and Solvang.  A comedy that is very entertaining.

This movie brings us to Yakima Valley in Washington.  Meet Franklin, a successful wine salesman who truly hates his life.  Not a fan of his job, and realizes his girlfriend is actually cheating on him.

As the movie goes on, Franklin eventually meets the “other man” and he soon realizes he needs to let go of his baggage.  A very entertaining film that had me laughing a lot.

A visit to local winery Chateau Montelena encouraged me to sit down and watch Bottle Shock, which this movie, showcases Chateau Montelena and the famed 1973 Chardonnay that won out in the Paris wine competition.

Which all started when a Paris Wine Sommelier flew out to Napa Valley to find contestants for the wine competition.  But, it’s truly in the characters of this movie that have you continually watching.  A new favorite of mine.

Yes, the movie is based on the true story of this competition, however, it’s far from non-fiction.
4) Red Obsession

This film is an Australian Documentary that truly follows the love of Red wine from Bordeaux to China.  Filled with many interviews of Wine Lovers, Winemakers, and journalists of the time.

While watching you also learn a bit about Red Wine and the existing industry. 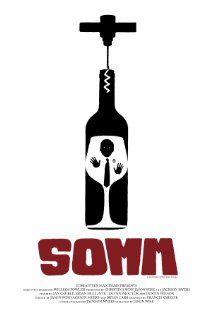 This documentary follows four individuals who are going after their Master Sommelier pin.  One of the toughest exams to pass in the world.  You get a true understanding of this exam and how much goes into the role of “Sommelier,” not only that, but what it takes to become a Master Sommelier.

These are all films I’d recommend for those that have a passion for wine, or want to get an inside view of just a tad bit more.  Of course, some lean more towards the comedic side.

4 Responses to Movies for the Wine Obsessed