Disclosure:  I was invited out to these 3 Wineries and Tasting Rooms during my stay in Paso Robles.  All opinions are my own.  And lets be honest, Tasting Rooms and Wineries are kind of a passion of mine 😉

It was a little over a month ago when I headed down to Paso Robles for the weekend.  Making it my 3rd visit within the past year of this fine Wine Region.  Each time I go, embarking on different experiences and tasting rooms along the way.  This time was no different.

The Paso Robles Wine Region has over 200 wineries within their area, and it’s always an overwhelming choice on where to go while in town.  I hope these 3 experiences will help make a decision a bit easier the next time you’re in town.

If you’re coming from Southern California, you may be very familiar with the Riboli family, and their San Antonio Winery properties in Downtown Los Angeles and Ontario, California.

But, truth be told, there’s something special about coming to the Paso Robles Tasting Room property, since a lot of the wines that come out of the San Antonio Winery are made and created right in Paso Robles, but it wasn’t always that way.  The wines actually DID get their start in Los Angeles, but over the years, as Los Angeles became more urban, the vineyards got moved elsewhere, but the property in Los Angeles is still a reminder of the HUGE WINEMAKING lineage within the city, and San Antonio Winery is still the longest running winery in the city today! In 2017, they will be celebrating 100 years of winemaking within Los Angeles! 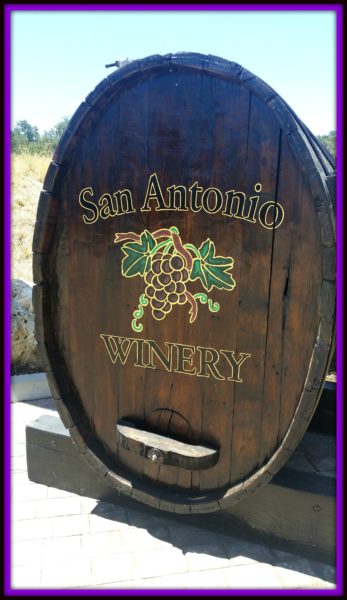 And, if you are partial to Sweeter Wines, San Antonio Winery is a GREAT place to start with your wine tasting journey.

However, if you’re someone like me, who has established a more developed Wine Tasting Palette, they also have some GREAT wines to try too from their Artisan Reserve Wines Series, which is exactly what I did while visiting:

Some favorities during the tasting included:

Windstream Chardonnay: which was a well balanced Chardonnay and aged in French Oak barrels. This Chardonnay comes out of the Santa Lucia Highlands. 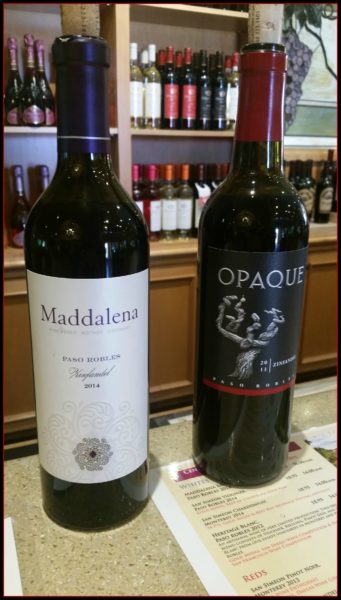 Another favorite of mine came out of the Opaque series with their Malbac varietal.  For me, Malbac is a varietal you should truly start paying attention to in Paso Robles.  This region has something special going on with it, and the true flavor notes are captured in a way that brings out the best of Malbac.

The San Antonio Winery is a great 1st Stop, especially if staying at the newly built Allegretto Vineyard Resort, just down the road from the tasting room.

Whenever I explore a new California wine region, you can pretty much guarantee that I will be spending a bit of time in that area’s Downtown space.

The downtown areas of Wine Countries usually have GREAT Tasting Rooms, just waiting to be discovered, usually some pretty incredible lunch spots, and if you’re lucky, a couple of Dessert stops along the way too! (just ask me, and I can point a few out along the way!)

Paso Robles definitely has ALL of the above!  And I highly recommend spending some time in their Downtown Area the next time you’re in town.

With that being said, Paso Robles Downtown has 14 Wineries and Tasting Rooms all within walking distance of one another.  Seriously, the best part about Tasting Rooms!

One such Tasting Room is Parrish Family Vineyards: 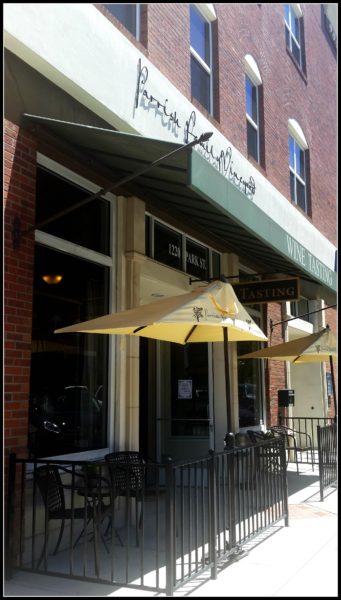 Their adorable patio area, and sign upon their tasting room was quite inviting.  Upon entering, the TASTING ROOM was packed.  For me, that is ALWAYS a good sign to how well the wine is perceived.

I quickly grabbed a seat at the Tasting Bar, and began my tasting experience.

Hearing the story of David Parrish, and the history of his grandfather was inspiring, but what was even more so, was tasting the wines that came with the story:

See story below that came directly from the Parrish Family Vineyards Site:

Atascadero was intended to be built as a utopian community with agricultural sustainability. That’s what EG Lewis had in mind, when he purchased 27,000 acres in the Atascadero/Paso Robles area.  Lewis called upon a man named Earl Henderson, who was farming in the San Joaquin Valley at the time, to be the viticulturist managing the acreage set aside for wine grape production. With great success, Earl planted and managed approximately 740 acres of wine grapes that consisted of Alicante, Charbon, Petit Syrah, and Zinfandel (the Zinfandel cuttings were purchased from the Paderewski Ranch).  Unfortunately, no one could foresee two major problems that would lead to the collapse of this new fledgling industry: U.S. Prohibition and the Great Depression.  Although Earl was able to sell his grapes privately to individuals who could make their own wine, he was unable to have a commercial winery.  He and his wife, Katie, settled in Atascadero calling it home, raising their kids, and watching the next generations grow.

Fast forward 70 years, and David Parrish, Henderson’s grandson, was living a similar dream with his own vineyard in the foothills outside Atascadero. Like his grandfather, he didn’t fall into the winemaking world; he was called to it.  However, it wasn’t until one evening, sharing a bottle of wine with his brother, overlooking the vineyard, that David considered the possibility of taking it a step further than their grandfather ever could: opening their own winery.  The Parrish Family took the leap!  The family began producing their boutique wine in 2004 and later opened a tasting room to the public in 2011.  In memory of their grandfather, the family has named one of their labels, P.O. Box 1, since Earl and Katie Henderson had the first P.O. Box in Atascadero. ~Parrish Family Vineyards

With a story like that, THIS, this is exactly why I love exploring wineries all around California.  To hear the stories, to hear the passion, but to also see the family ties that lie within all of us.

All of David Parrish’ wines stood out to me, but I was quite partial to his 2012 Zinfandel (no surprise, as I’ve become a pretty big Zin fan,) but this one had particularly nice flavor.  It was HIS first time making the Zinfandel too, and he had an unique twist on the process: David Parrish decided to make this wine differently by only choosing to use the grapes on the north side of the vines.  The grape clusters on this side only received morning sunlight and filtered light, rather than harsh afternoon sun.  The hope was to capture the true essence of the grape! 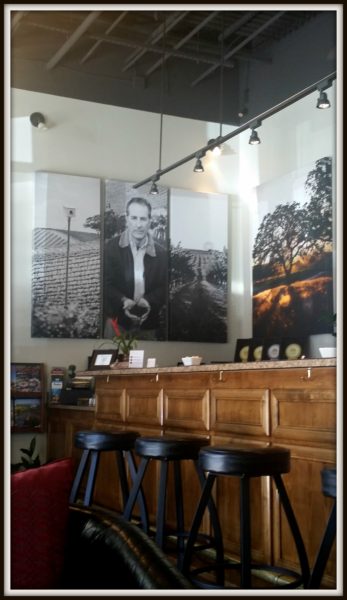 (Photos around the Tasting Room are taken by Cecily Parrish Ray, daughter of David and Lynn Parrish).

But, as we kept going through the tasting, by the end, you could truly see the true winner of the batch with the Silken Reserve. They had both a 2010 Silken Reserve and a 2012 Silken Reserve, but 2010 was the one available for pouring! The 2012 was only available to Club Members.

The Silken Reserve is a blend of Cabernet Sauvignon and Petite Sirah. A perfect wine to have over dinner.

I have to say, there’s something special about driving out to an actual Winery in Paso Robles.  You get a true sense of the area, and by the time you get there, you’re ready to just sit back with a glass of wine, relax, and appreciate all that is around you.

As soon as I pulled up to Rotta Winery, I knew I was in for something special.  The grounds, itself, spoke volumes: 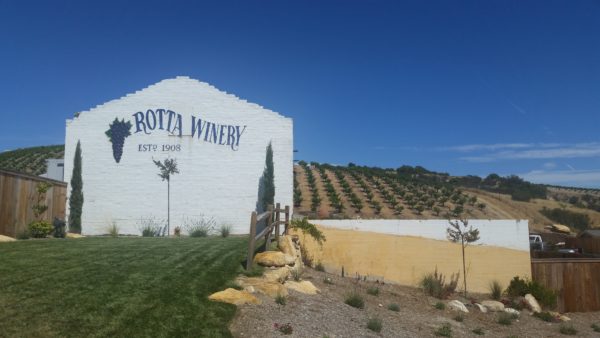 Rotta Winery happens to be one of the three original wineries within the Paso Robles region!  The Winery also happens to sit on some of the most fertile soil around the area.

As I met up with Winemaker Christian Tietje, (also winermaker at Cypher Winery) he pointed out to me all of the bonerock that was found all around the property, and a great example of how fertile and extraordinary this soil was compared to other areas of Paso Robles. 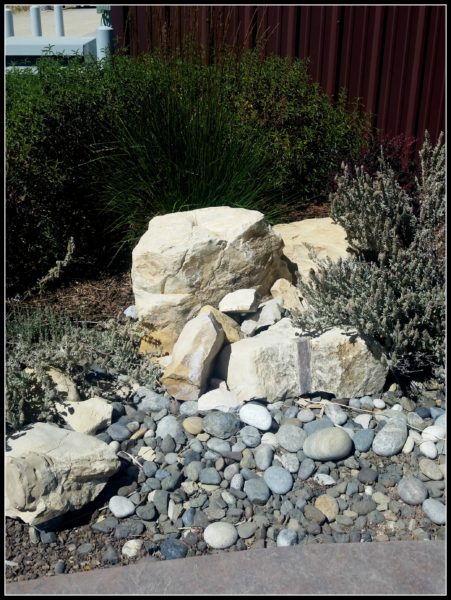 We then headed towards the barrel room, where winemaker Christian, takes guests of the winery in for a truly one of a kind Barrel Tasting throughout the day.  Through this experience, the passion for wine that Christian embarks truly comes out, and takes guests of the winery on a true journey of exploration straight from the barrel to how blending of wine can change the outcome completely! 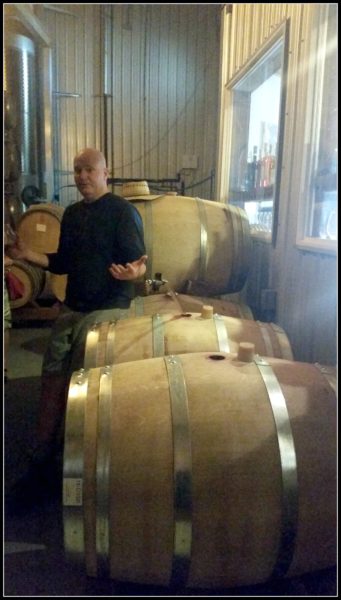 Some of the wines that you can experience at Rotta Winery include some nice Bordeaux style wines: Voignier, Roussanne, Rose (perfect for these hot summer days!), Chardonnay, Zinfandel, Cabernet Franc, Cabernet Sauvignon, and my personal favorite: The Malbac (again, this was my 2nd Malbac purchase of the day in Paso, a true telling sign of how this varietal is being showcased in the area!)

BUT, I must say, you won’t leave this winery without a favorite wine to go home with, saying a lot about the winemaker behind the wine.

And there you have it, 3 different Tasting Experiences right in Paso Robles!  All with really good wine, different stories, and history of the Winemaking of California.

Where will you be headed?

One Response to 3 Great Tasting Experiences in Paso Robles!