Oh Summer, Berries, Melons, Stone Fruit…. some of our favorites right?  Every Summer, I look forward to cutting open my first Watermelon of the Season, and back in Minnesota, I was a huge Cantalope fan, so you can imagine my excitement when we were pulling up to an Organic Melon Farm in the San Joaquin Valley! 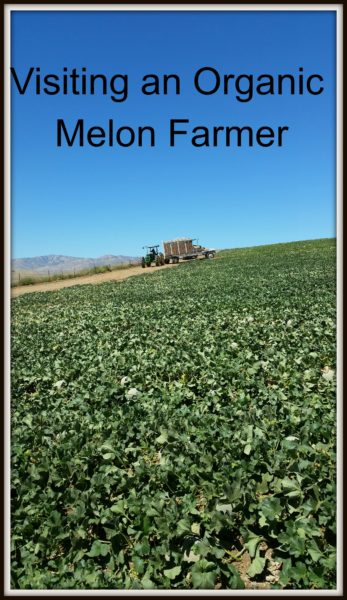 But, the road to get there was a little heart breaking.  As we drove from the East Side of Fresno to the West Side, the West side told a much different story:  We drove by towns (Firebaugh) where the main street shops had closed down, we drove by towns that were struggling to stay together.  The West Side was mainly agricultural towns, full of farmers, but because of the drought the past several years, towns had taken on some hardships, and what was left, told that story.

As we drove further along, we’d see the farms, we’d drive by fields of almonds, even saw a cotton field, but then we’d also drive by farrow fields (fields that were all set, ready to go for that years harvest, but because of there not being enough water, the fields sat empty (even after farmers invested a ton of money into getting that field ready!) But there is a land purchasing program where irrigation districts will go through and purchase the lands that aren’t getting water, so no one will grow on it!

I always said, being a farmer is being the biggest risk taker out there! As farmers begin the season, they pay in for their water to their irrigation district, but truthfully, they don’t know how much they’re going to get back every year.  Some years, they are only getting a 5% allocation, that’s tough, especially in the San Joanquin Valley!  Keep in mind, Fresno County is the 3rd LARGEST Farmer County in all of California! 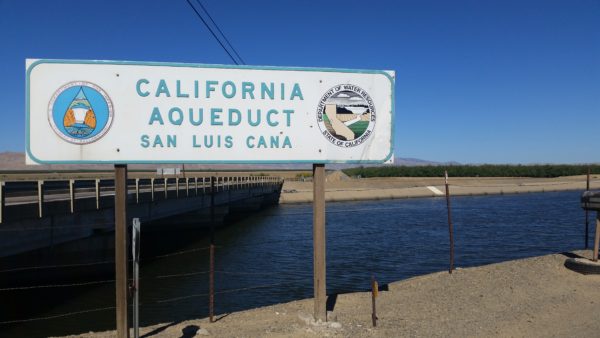 The San Luis Canal that provides water for 1/3 of the Los Angeles Population.  Water flows all the way from Lake Oroville in Northern California.

The West Side of Fresno gets their water from up north, a huge reason why the water infrastracture system is so important in the state of California.  For places like the San Joaquin Valley, where water isn’t as frequent, It is what makes water possible for the agricultural on the West Side of Fresno.

But then we arrived to Del Bosque Farms where we met up with Joe Del Bosque, who has been farming since 1985.  An organic melon farmer that grows Watermelons, Cantalopes, Gaileas, Honeydew for Whole Foods, Sprouts, Trader Joe’s, and higher end clientele.  He also grows Asparagus (March-May) Cherries (May) and Almonds! 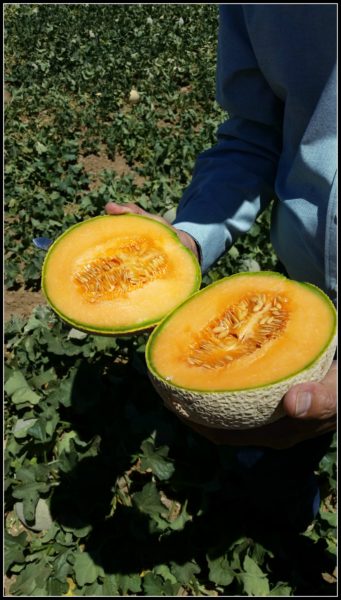 We started out in his organic melon fields where he showed us how to pick out a ripe Cantalope.  It is all in the color when picking out a cantalope, looking for a more yellowish skin in Cantalope.

With the Galeia Melon ( a cross between a cantalope and Honeydew melon) it’s an even more yellowish color that you’ll be looking for.  See below:

Left: The Color upon being Ripen, a more yellowish tone.  Being Cut straight from the farm.  Right: Enjoyment right at home.

Although the Watermelons weren’t quite ripe, we still had to explore the fields a bit:

We were in luck too because they were in the process of harvesting their Cantalopes and Galia melons that day!  So we saw the crew working.  To this day they still all hand harvest the melons! The crews are incredibly organized, which each person having a designated task as they go through the fields: 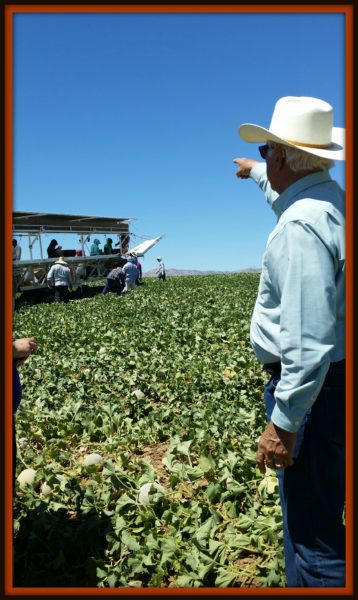 After exploring the Melon fields, we made a quick trek over to his Almond Trees: 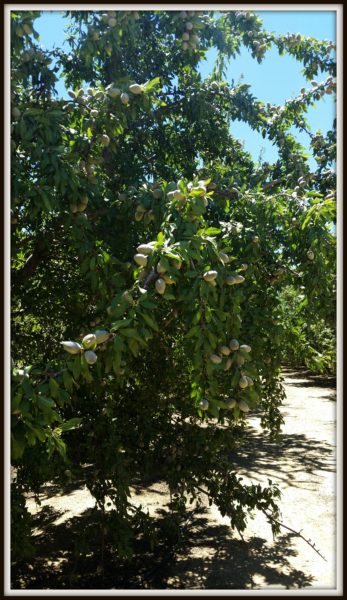 Almond Trees have a bad reputation in California for how much water they consume, however, I don’t think people are aware of HOW much Almond Trees do beyond just eating:

For example: in California Agriculture, there’s 3 parts to the Almond: The Shell, The Hull, and the Kernal (the part we eat!)  Nothing goes to waste in California:

The Shell, is used for dairy feed!  And is sent off to dairy farmers for their animals.

The Hull is used for animal bedding!

And of course, the kernal is used for Eating!

Farmers are constantly thinking of ideas of how to reuse the crops they have on their land, and especially their resources.

It was such a pleasure visiting with Joe Del Bosque of Del Bosque Farms, and seeing all that he does on the West Side of Fresno in the San Joaquin Valley.  We were quite impressed with how neat he keeps all his crops, and his land, and of course, we enjoyed the hillside views: 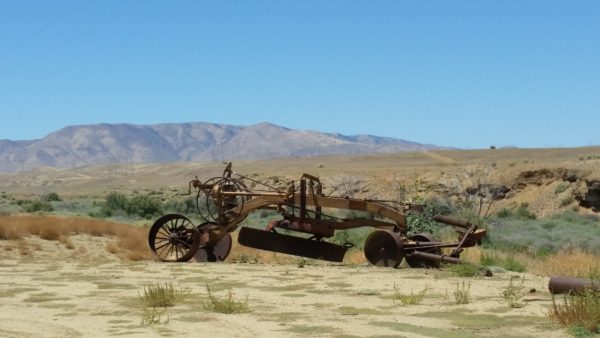 The view directly behind his Almond Trees

One Response to Organic Melon Farm in the San Joaquin Valley!