A few weeks ago I took a Central Coast California Road Trip, and spent some time exploring some of my favorite areas of California.

One area I hadn’t explored too much was around Pismo Beach, and since I had explored a lot of the Paso Robles region, it was time to focus a little more south in San Luis Obispo, particularly in the Edna Valley AVA.

The Edna Valley AVA is located just south of the town of San Luis Obispo and North of the town of Arroyo Grande, and about 5.2 miles East of Pismo Beach, California.  Because of the close proximity to the ocean, these breezes help cool the climate down, making the area a great growing region for cool climate wines, exactly why Chardonnay and Pinot Noir excel so well in this region.  The region was originally planted in the early 19th century by Spanish Missionaries, but saw its revival in the 1970’s with the plantings of the Paragon and Chamiscal Vineyards.  The region became it’s own AVA in 1982, formed by the proprietors at Edna Valley Vineyard (The Niven Family.)

My day started off with a tasting at Kynsi Winery: 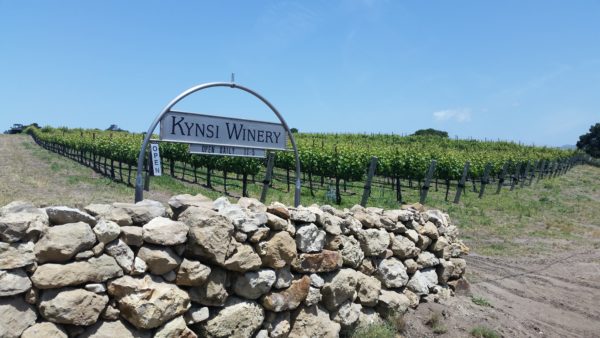 Upon first entrance, I knew I was truly going to enjoy my day in Edna Valley.  The small town charm, of California SLO Living was front and center throughout the Edna Valley.  EXACTLY why I love getting out to these smaller, wine regions, that still make incredibly GREAT wine.

I explored the grounds a little bit then walked into the entrance of Kynsi Winery, which felt like a great backyard space, perfect for an afternoon of sipping wine.  The grounds of Kynsi Winery use to be an old Dairy, and some parts of the winery still had that touch including their backyard barn: 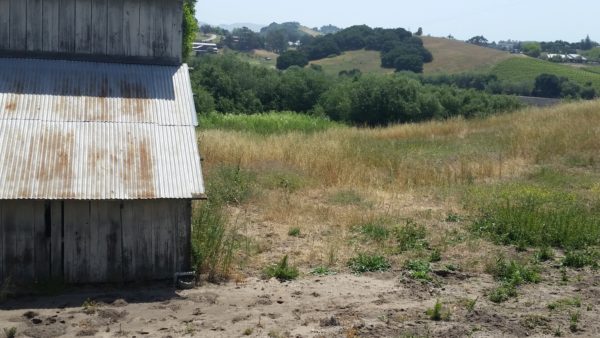 And the barn, truly, was where part of the tale of Kynsi Winery was born.  When they first purchased the property, there was a major gopher problem, and they soon found out that Barn Owls were their #1 predator.  They eventually installed two perches near the barn, and a nesting pair eventually found their new home, and guess what?  The gophers slowly began to disappear!

And that is why Kynsi Winery (which meals Talon in Finnish) has a Barn Owl as their mascot for their winery, and the barn still sits beautifully on their property.

To get my spring day started I had the option of doing a mixed flight or a flight that focused on just reds.  Since we were just nearing the beginning of summer, I knew a mixed flight was the place to start: 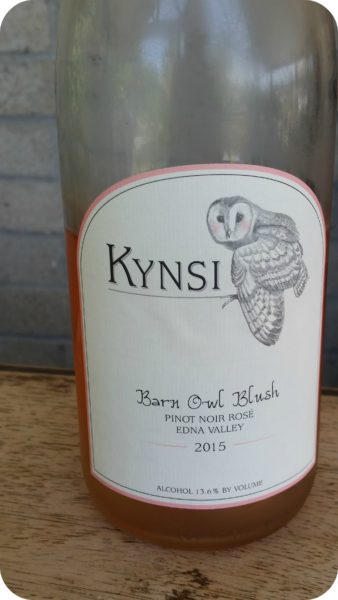 Kynsi Winery focuses on their Pinot Noirs, so it only made since that they would have a Pinot Noir Rose available just in time for summer.  This Rose retails around 24.00, which is priced right for a Rose. Very refreshing to start with, and perfect for these hot summer days.

After the Rose tasting, I also tried out their 2015 Chardonnay, before diving into their Red Wines, and in particular their Pinot Noirs.

The two wines that really stood out for me during my tasting were these:

The 2013 Nocturnum: which was a Red Blend of Grenache and Pinot Noir. Definitely a wine you could drink straight from the glass, but a wine that would excel with food. And a wine you could just sit smelling for hours.  Retail value: 39.00

And my absolute favorite was:

The 2013 Pinot Noir from the Bien Nicido Vineyard (out of Santa Maria Valley). This wine really showcases how they excel in producing Pinot Noir wines, the spice and cherry notes really stood out to me in this well balanced Pinot Noir. Retail value: 45.00

It was a great start to my day in Edna Valley,  and a great introduction in seeing how well Pinot Noir excels in this region.