Disclosure: This is a non-sponsored post.  We had such a fun time doing this that I wanted to share.

Back in June I took my mom out on the town in Downtown Minneapolis.  My grandpa had told us about the bike trolleys, so after our show, we flagged one down and tried it out.

Throughout the evening starting at around 6pm and going up to 2 or 3am these drivers ride their bikes trekking people to various locations throughout Downtown Minneapolis.

Going to the Twins game?  No sweat.  Park your car, walk to the game then catch one of these bike trolleys afterwards and they’ll take you to your car.

Looking for a tour of Downtown Minneapolis?  Hop in one of these trolleys and enjoy the ride.

There are tons of these drivers riding around in their trolleys.  The suggested donation was 5 dollars per person per ride, but it’s up to you to give more or less, depending on what’s affordable for you. 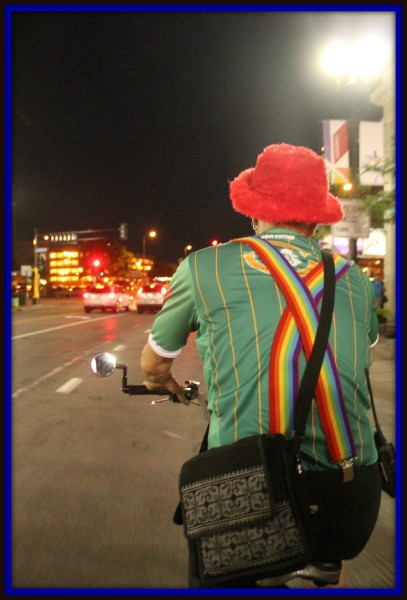 Our driver was awesome that evening.  He even attached a radio to his bike so as we were driving along tunes were playing.  Of course, as the songs were coming out we were singing along and laughing the entire time.

So, if you’re in town visiting Minneapolis I highly recommend taking a trek on a bike trolley.  It will be a memory to last a lifetime.